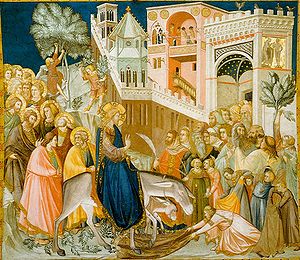 Entry of Christ into Jerusalem (1320) by Pietro Lorenzetti: entering the city on a donkey symbolizes arrival in peace rather than as a war-waging king arriving on a horse

9 And the multitudes that went before, and that followed, cried, saying, Hosanna to the son of David: Blessed is he that cometh in the name of the Lord; Hosanna in the highest.