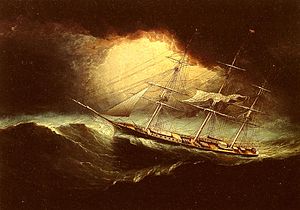 23 They that go down to the sea in ships, that do business in great waters;

24 These see the works of the Lord, and his wonders in the deep.

25 For he commandeth, and raiseth the stormy wind, which lifteth up the waves thereof.

26 They mount up to the heaven, they go down again to the depths: their soul is melted because of trouble.

27 They reel to and fro, and stagger like a drunken man, and are at their wit’s end.

28 Then they cry unto the Lord in their trouble, and he bringeth them out of their distresses.

29 He maketh the storm a calm, so that the waves thereof are still.

30 Then are they glad because they be quiet; so he bringeth them unto their desired haven.

MP3: They that go down to the sea in ships / Herbert Sumsion / The Ecclesium Choir / Priory Records

They that Go Down to the Sea in Ships by Herbert Sumsion (1899-1995). For SATB choir, organ accompaniment. OT 12 B. Royal School of Church Music. Sacred. 16 pages. Published by GIA Publications.